For the self intervention of choice I dicided to take something away that I use often (too often). It took me a few days to figure out what I should take away. The first thing that came to my mind was may phone. On a second thought I decided not to choose my phone for the intervention as I am not very dependent on it. I don’t mind not having a phone. My phone was broken once so I didn’t have it for a month or longer and that wasn’t an issue at all. It was only a little bit complicated to keep in touch with my family… The second thing I thought of was social media but that is same as with my phone. I don’t really need social media so it would challenge me. And I wanted a challenge.

Finally, I decided to take watching movies and series away. In particular Netflix. After a few days actively monitoring my habits, watching Netflix was definitely the most dominant one. Furthermore, it is hard for me to not think of watching a movie or series after a busy day or on the weekend. I calculated that the average time I spend with watching movies or series is about 3-4 hours a day. Following, my self given challenge was to not watch movies or series for two weeks.

The first few days weren’t as hard as I thought. I was very persistent to do this intervention successfully. Through the intervention I felt like living a much healthier life. Instead of watching a movie I went for small walks, read books or did something with friends. Over Thanksgiving I visited parts of my family near San Francisco and was busy anyways. I travelled and saw many amazing places during the break and all without watching a movie.

Feeling Status: tired and hagged off

Then after Thanksgiving break it happened: I had a very busy start with classes and on Monday evening I watched a movie. It was the just released second part of a movie I really liked. I was very exhausted from class and just didn’t feel like doing anything else but watching that movie. But, what was different this time was that I felt very bad afterwards. I felt bad because I did not stay strong and fell for watching the movie. The next day was again very busy. It was so busy that I had a hard time calming down in the evening. Usually, I would have watched another movie or series but I resisted. The only issue was that I just couldn’t calm down. I tried to read a book and listen to music but it didn’t help. In the end, it took me half of the night to finally fall asleep and I was very tired next morning.

The last few days were less busy and it was easier for me to fall asleep. Reading was my main replacement for the movies. The less exhausted I was the easier it was for me to do something else but watching Netflix. Today was my last day of the intervention and I am happy about it. I am glad that I pulled it through with (nearly) no interruption and it was very interesting for me to see how hard it is to resist watching Netflix but as well how much I accomplished the last two weeks. I had a great time with my family and friends, did my homework right after class, walked over 10000 steps every day, travelled to a lot of places, and finished reading a book. Not using Netflix gave me a lot of time. On the downside I had a few “restless” nights and didn’t feel like calming down when it was busy.

Ultimately, I think this self intervention was interesting for me in order to see how much my habits can change through not doing one thing. I enjoyed having “more time”. But in future I will not quit watching movies. Instead, I will monitor the time that I am watching and cap it if needed.

(I will also read more books. I really enjoyed that part of the self intervention and found a new hobby.)

The book I read during two weeks of not watching movies or series: 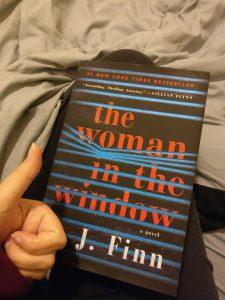 Self Intervention of Your Choice

Self Intervention of your Choice

You will make a change in your life for a week. This change should be toward a change you’d like to see in the world. It should also be significant, in allowing you to explore your response to imposed change. I should start with, “I can’t do that because…”, and you transition to, “In order to do that, what would have to change? What might happen?” Document your experience.